How to Get Rid of Cigarette Smell & Smoke in House

Nothing is quite like the strong aroma produced from a pack (or two!) of cigarettes that have been smoked in an indoor environment like a home. The cigarette smoke produces this potent odor that will be contained and harbored within any absorptive materials or items within reach of the trails of cigarette smoke in the air – which will result in your home reeking like an ash tray. Cigarette smoke odors can be a major issue in many indoor environments, like apartments, rental homes, or even in a newly purchased home where the previous occupants heavily smoked within this indoor space, leaving a lasting cigarette odor hanging in the air that seems impossible to mitigate.

Although the smell of cigarette smoke is a noxious odor that you would prefer not to have lingering in the air of your personal indoor environment, that is not the only downfall to cigarette smoke. As smoke is produced into the air it can also result in potentially dangerous effects to the health of those exposed to this particulate matter in their indoor environment. Smoke is composed of an amalgam of chemicals and particulate matter that can aggravate and lead to the development of different health conditions and issues, depending on the level of exposure and concentration of smoke in the air.

In this article we are going to discuss the potential hazards that cigarette smoke can present to indoor air quality and learn methods to properly remove cigarette smoke and neutralize the cigarette smell from the air, both safely and effectively.

The plumes of haze that are released into the air from burning organic compounds and chemicals is universally referred to as smoke, that will travel in the air and taint the air quality (both indoors and outdoors). Smoke can be produced from a number of sources including natural wildfires, industrial fires, campfires, fireplaces, candles, cooking smoke emissions (wood-burning stoves or barbecues), fumigation for pest control, and from smoking devices such as cigars, vapes, marijuana, and even cigarettes. Although smoke can be produced from a number of sources, the composition of the smoke can vary depending on the specific source and what it is burning.

What is smoke made of? According to the Energy Education of the University of Calgary, they state the following about smoke, “Smoke is a visible collection of a variety of solid, liquid, and gas particles left unburned during the combustion process. It is possible for smoke to contain a large number of different chemicals and fumes, although visible smoke is mostly composed of carbon or soot, tar, oils, and ash”. The production of smoke into the air is caused by a substance that has not undergone complete combustion due to a lack of oxygen present during the burning process – this will create soot, smoke, and ash into the environment. As we discussed earlier, cigarette smoke is vastly different from any other type of smoke produced such as from a wildfire or campfire, due to the fact that cigarette smoke can contain more hazardous chemicals within its composition that can be released into the air and potentially impact human health.

The composition of smoke and smoke particle size will vary depending on the source of the smoke emissions, however, primarily smoke is composed of carbon dioxide, water vapor, carbon monoxide, hydrocarbons and other organic chemicals, nitrogen oxides, trace minerals and particulate matters. The emission of particulate matter from cigarette smoke is among one of the most hazardous components to smoke, and according to a publication published by Int J Environ Res Public Health, they found that indoor air pollution with harmful particulate matter (PM) is mainly caused by cigarette smoke. This publication also stated the following in regard to the health risks of cigarettes and cigarette smoke;

The exhaled cigarette smoke produced in the air is a significant contributor to environmental tobacco and second-hand smoking. This type of smoke released from cigarettes causes the concern of particulate matter and/or fine particulate matter exposure in the airspace. According to the EPA, they state that particulate matter that is smaller than 10 micrometers in diameter are a major cause for concern, as they are than easily inhalable into the body, and eventually into the lungs and potentially the bloodstream.

Did you know that cigarettes contain an amalgam of different chemicals that are produced and released from the smoke of this product? It is a common misconception that cigarette smoke only contains nicotine, however, the list of chemicals within the composition of cigarettes and its smoke is significant, and some of these chemicals are known pollutants that are dangerous to the air quality and human health. According to the American Cancer Society, they said that tobacco smoke contains a mix of different chemicals in its composition, “Tobacco smoke is made-up of thousands of chemicals, including at least 70 chemicals known to cause cancer – chemicals referred to as a carcinogens”. Some of the chemicals that are found in tobacco smoke can include the following;

Is Secondhand Smoke Worse Than Smoking?

For those individuals who are not smokers but are frequently exposed to secondhand smoke in the environment, your body will still be impacted from this smoke exposure – as nicotine and other harmful substances will enter into the body. According to the Cleveland Clinic, exposure time to secondhand smoke is significant and can lead to health effects such as the following;

Cigarette smoke will significantly compromise the quality of the air in the environment and it has been found that air pollution emitted by cigarettes is nearly 10 times greater than diesel car exhausts, according to a controlled experiment reported by Tobacco Control. Environmental tobacco smoke (ETS) will produce fine particulate matter into the air that can lead to increased levels of pollution in the air, this also is true for indoor environments that are exposed to elevated levels of cigarette smoke in the air. When cigarette smoke is present in the indoor air of a home, particularly in elevated concentrations, the smoke will also have an impact on not only the human occupants of the home but also on the pets within this environment too, that can inhale the smoke – including particulates and chemicals, that can exacerbate certain health issues within the pet.

Additionally, when cigarette smoke is emitted into the air of an indoor environment, the smoke will also create a potent smell throughout the entire airspace, a smell that will be extremely difficult to remove.

How Long Does Cigarette Smoke Linger in a Room?

For those who are stuck dealing with a newly purchased home or rented apartment that has the smell of smoke still lingering in the air of the home, a big question they have will be, “how long does this cigarette smoke odor linger in the air?”. Although this is an important answer, it is also one that is difficult to answer, as the amount of time for smoke to linger in the air, along with the smell will be ambiguous. There are, however, three important factors that will contribute to the duration of time that the cigarette smoke will linger in the air; the size of the room or space, how much ventilation the room receives, and the level of airflow that the environment is exposed to in the space.

The chemicals and pollutants that are released from cigarette smoke have the potential to travel in the indoor air space for quite some time, when the conditions are idea, leaving the putrid smell of cigarettes and higher pollution levels present in the home. Also, another source of cigarette smoke can be furniture, carpeting, and any type of upholstery that has the potential to absorb the odors and retain them in their material. This odor retention on fabrics and upholstery in the home will also play a role in the duration that the smoke and odors from the cigarettes stay in a room.

How to Hide Cigarette Smoke Indoors

If you live in a home that is contaminated by the aroma of cigarette smoke in the air, the pursuit to neutralize this odor or hide the cigarette smoke odor from the environment is heightened. For those who are stuck in this position and seeking relief from this strong and hazardous smoke and odor, a go-to solution is to implement air quality control products to the environment to help contain, neutralize, and breakdown the odors and capture fine particulates from the air that are produced from the cigarette smoke. These types of products for your home’s air can include high-efficiency HVAC filter that can be utilized in your air handling system, along with stand-alone air purification devices that work to effectively filter the air of pollutants and contaminants, and in some air purifiers even odors can be neutralized.

Air purifiers and HVAC filters will do a great job of aiding in the mitigation of cigarette smoke that is present indoors in the air and on the surfaces of the home. These systems and filters are designed to capture the cigarette odors as they are being created, along with helping to prevent them from lingering in the airspace for a long period of time. However, sometimes the concentration of cigarette smoke and odors will be too much for just the use of these systems and air filters, and thus it will require additional source cleaning in the environment.

Below we are going to discuss some of the best air filters and air purifiers for mitigating and neutralize both particulate matter and smoke odors from within an indoor environment.

Best Air Filter for Smoke in the Air 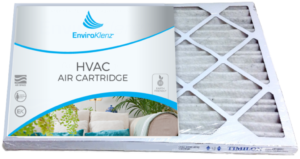 When it comes to removing the particulate matter from the air produced by smoke, one of the top-recommended choices is a HEPA filter, according to the New York Times. A HEPA filter is an air filter that is effectively capable of removing particulate matter larger than 0.3 microns from the air, with a 99.99 percent efficiency, this include particulate matter produced from cigarette smoke. This type of filter can be used in both a stand-alone air purifier and an air handling system. However, when placing this type of filter in an air handling system it is known to restrict airflow significantly due to the media of the filter.

An additional option for an HVAC filter for your air handling system may be a filter that is capable of containing and neutralizing VOCs and noxious odors from the air, including those chemicals and odors produced from cigarette smoke in the air. The EnviroKlenz HVAC filter utilizes a patented earth mineral technology that is designed to contain and neutralize/break down a variety of chemicals and noxious odors without the use of masking agents or byproducts. The filter is easily installed into your HVAC unit and can last for up to 6 months depending on the environmental conditions in the indoor space.

An air purifier is a very resourceful device that can successfully aid in the removal of cigarette smoke and odor from the air that is trapped within an indoor environment. When it comes to selecting the right air purifier for your cigarette smoke removal project, there are multiple things to consider including the type of technology the air purifier uses, how long the filter life of this technology is, and does this technology produce any additional hazards to your indoor environment.

Three technologies that we going to compare for cigarette smoke removal will include ozone generators or machines, carbon filters, and the EnviroKlenz Air Purifier.