Is it Safe to Have Mothballs in the House?

Is there an overwhelming chemical smell invading the air space of your home? One of the most infamously used pesticides that are used in a home and that have been used for decades now is that of mothballs. These classified pesticides are frequently used in homes for the purpose of controlling moths, silverfish, and other fiber pests in wool and other natural fiber clothing and materials. This regulated pesticide can cause quite an upheaval in your home such as tainting the indoor air quality, effecting the health of those occupants exposed to these mothball chemicals in the air, and even the smell that is produced into the air from mothball usage in a home.

A big question when it comes to mothballs and their use in the home is, “is it safe to have mothballs in the house?”. It has been discussed whether or not the chemicals in mothballs can be toxic to humans and pets that occupy an indoor space where mothballs are used – and evidence has indicated that this may be the case, especially in large quantities in the environment. Therefore, when it comes to mothballs should you avoid the use of this pesticide in your home and what are some superior alternatives to utilize to keep pest away from this indoor living space?

In this article we are going to learn more about the health impact of mothballs in your home, the chemical structure of mothballs, and how long and the best ways to mitigate the smell of mothballs out of the air space of an indoor environment like a home.

Have you ever used mothballs inside of your home? If not, then you might not understand exactly what mothballs are and how they are designed to work within your indoor environment. During the winter months you may have to store your winter apparel during summer and only unbox these clothes until next winter comes, however, if you do not properly store the clothes you may be met with clothes that have holes in the material from hungry moth larvae. These insects love to fester and thrive off of clothing materials, and thus it is important to properly store these clothing away with protective measures – such as mothballs.

Mothballs are small balls that contain chemical pesticides and deodorant that are sometimes used when storing clothing and other articles of material that are susceptible to damage from mold or moth larvae. In addition to acting as a protective chemical from moths and mold, mothballs will also be used as a pesticide to control silverfish and other fiber pests that will feed on fabric material, as moths and carpet beetles love anything made of natural fibers because it will allow for them a place to lay their larvae and guarantee their offspring has a hearty first meal of your clothing material.

What are Mothballs Made Of

The long-used mothballs have previously been made of different chemical compounds which has been changed over the years, especially due to the toxic nature of the original chemicals used in mothballs. Older mothballs consisted primarily of naphthalene, a chemical produced from crude oil or coal tar that is used primarily as an insecticide and pest repellent. However, this toxic gas can cause significant adverse health effects in those exposed to this chemical agent in their indoor environment, as well as will act as a flammable chemical which can be dangerous to the indoor environment this chemical is used within. Thus, these are the reason behind the removal of this chemical [naphthalene] from mothballs produced today.

Many modern mothball chemical formulations will now consist of the chemical 1,4-dichlorobenzene. This chemical is known to be less flammable but will also work as a fumigant insecticide to control clothes moths. Similar to naphthalene, 1,4-dichlorobenzene is also a hazardous chemical to human health and to animals as well. According to National Pesticide Information Center (NPIC), this mothball chemical is broken down in the body to form other compounds that may be harmful to cells or organs such as the liver.

How Do Mothballs Work

The use of mothballs inside of a home, as we discussed previously, is to use as a pesticide to protect stored fabrics and materials in particular. The use label on mothballs lists that it is to be applied to kill moths and other fiber insects to protect clothing. These mothballs use the gas which evaporators from the chemicals they contain to kill off the moths and moth larvae that are trying to develop and thrive on these materials in your home. The process to use mothballs will consist of the following directions;

Why Do People Use Mothballs

The primary use of mothballs will be strictly for the use of these insect repellant to protect clothing and other fabrics that are being stored for a longer duration of time, such as clothing and linens after winter through the spring and summer months. Mothballs are designed to be stored in air-tight bags made of a non-reactive plastic such as polyethylene or polypropylene. The clothing that is being protected by mothballs will also need to be enclosed in these plastic sealed containers to ensure that the mothballs chemical vapors are not released and spread into the air of a home. When the chemical vapors of mothballs begin to flood the indoor air space of a home it will not only contaminate the indoor air quality, but it will also diminish the effectiveness of the mothballs in your storage containers.

Additionally, many homeowners will also use mothballs as a snake repellent or rodent repellent (squirrels and rats). However, in reality mothballs are not effective for this purpose. When you use mothballs for this use in your yard it can typically be harmful than beneficial. These mothballs will eventually start to negatively impact the occupants of the home and even pets in the household in some cases.

Can Mothballs Make You Sick?

The use of mothballs in the safe, confined space of your home can present many potential health risks and problems, especially with improper use of this chemical pesticide. It has been an important question posed in regard to mothballs, ‘can mothballs make you sick?’ and the answer to this question is yes, potentially. According to the National Pesticide Information Center (NPIC), the chemicals use in mothballs can be toxic to humans and pets and as people are exposed to these chemicals that are released as toxic fumes in the air space of the home. As we discussed previously, when mothballs are improperly used and are not placed within an airtight, sealed container, the mothball chemicals will rush into the air of your indoor space and lead to compromised indoor air quality and strong potent chemical smells in the environment.

How Long Does Mothballs Smell Last

The chemicals in mothballs, such as 1,4-dichlorobenzene is designed to slowly sublimate from a solid ball into a toxic gas, which will then act as an effective insecticide. When these chemicals release into the air it can be termed off-gassing, which is a process in where solid or liquid chemicals turn into a gas or vapor as it acclimates to regulated indoor temperatures. Typically, mothball smell will usually be described as a sour, pungent, chemical smell that will be associated with things like closets and storage units. If you have ever smelled mothballs before than you will know exactly this odor that we are describing, and worst of all the smell will spread like wildfire in the air of your home and ultimately end up tainting the entire smell in the home.

When it comes to how long mothball smell will last in the air space of your home, this can be an ambiguous timeframe that will depend on various factors inside the home, such as how much mothballs were used in the indoor space, the airflow and ventilation in the home, and solutions that are used to combat this odor. As the mothballs sublimate and turn into a gas this process is expected to last for over four to six weeks, however, the smell can linger in the air of the home for years in some extreme cases. Therefore, if you are dealing with mothball smell in your home it may be necessary to turn to mitigation solutions that will actually attack and neutralize the odor completely from the airspace of your home.

How to Get Rid of Mothball Smell

The process of getting rid of mothball smell in your home can be a thorough and extensive process for any homeowner. There are various different types of mothballs that can be used in a home, all consisting of specific chemical structures, which will require various solutions to removing the toxins and odors in the air produced from the mothballs. Camphor mothballs, a new popular type of mothball used in homes today, will produce solid particulate matter into the air, as well as emits a strong chemical odor into the air that can all lead to adverse impacts on indoor air quality and human health. These two pollutants produced from camphor mothballs can often times be mitigated through the use of powerful, effective air purifiers that work to attack and remove these two forms of pollutants from the air. Although there are various different types of air purifiers available on the market today, they each will work to attack specific pollutants in the air, whether that be pollutants, odors, chemicals, and particulate matters from the air space. However, when it comes to an air purifier that is effective at removing mothball smell and pollutants from the air, you will need to look for an air purifier that primarily focuses on odor and chemical neutralization, as well as particulate removal in the air. 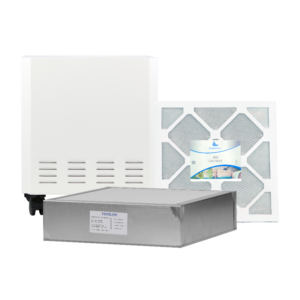 The EnviroKlenz Air Purifier is an effective and safe air purifier that helps to remove VOCs and noxious odors from the air of an indoor environment. The EnviroKlenz technology is unlike any other air purification technology, it uses a patented earth mineral technology that effectively contains and neutralizes chemicals and noxious odors through adsorptive neutralization. When it comes to the chemical odor produced from terpenoids, the EnviroKlenz Air Cartridge contained in the air purifier will effectively work to contain and neutralize the terpenoid from the air, thus removing the pollutant and chemical odor from the environment. The second stage filtration in the EnviroKlenz Air Purifier is a hospital-grade HEPA filter that is able to effectively capture 0.3 microns or larger onto the filter, this will include the solid particulate matter that is released from the mothballs into the airspace.