Should You Use Air Scrubbers for Mold Remediation

Sometimes inside of a home you will experience drastic events such as construction, remodeling, and even mold issues that will call for a complete home remediation within this indoor space. Mold is a problem that can happen in almost any area, no matter the conditions or environment – whether you are experiencing warm or cold seasons. This fungus is a fast growing, aggressive invader that can take over inside of a home and lead to compromised indoor air quality, potential damage to surfaces of the home, and health issues for those occupants that face heavy exposure to this indoor space. If you find that mold is a problem inside of your home, you may need to recruit equipment to aid in the mitigation and remediation of the environment such as the use of an air purifier and/or an air scrubber for mold remediation.

An air scrubber can be used for a variety of problems within the home from indoor spaces undergoing renovations, where water damage was present, after a fire, and even mold presence inside the environment. These portable air devices will effectively help to mitigate these environments that may have become contaminated by a range of pollutants that can be produced from these indoor spaces that have been subjected to a drastic event, such as the events listed above. However, is an air scrubber the best air device to use to filter an indoor environment that has been contaminated by mold growth or is there a better air cleaning device that will be more efficient for mold remediation?

In this article we are going to learn more about air scrubbers and how they work for mold, if an air scrubber will be capable to mitigate and remediate an indoor environment after mold has contaminated the space and is an air scrubber better than an air purifier for mold spore removal!

What is an Air Scrubber

Air scrubbers are typically used for commercial applications, rather than for use in a personal indoor environment for cleaning the air. These commercial air cleaning devices work to remove chemicals, gases, and toxic particles from the air that can come from major projects or water intrusions within a space. An air scrubber works to cover thousands of square feet with a single air scrubber, which makes them more cost effective than an air purifier when dealing with a significant contamination in the indoor space of a home or other indoor environment. As I said previously, air scrubbers use dry and wet scrubbing and when wet scrubbing is used it will suck the air through a damp pad or filter to trap free-floating particles and contaminants that are found in the air. Conversely, when the dry scrubbing is conducted it will suck in the pollutants and particles through a dry filter.

How Does a Scrubber Work

When considering the mechanics of how an air scrubber works due to its multiple capabilities including wet and dry air scrubbing there will be different ways in which the air scrubber will work in the environment. Generally speaking, the air scrubber will work by removing pollutants from the air that have been sparked by or created by a significant event in the environment (such as mold damage, water intrusions, flooding, fire, etc.). These air scrubbers will act in the smokestack and often use limestone, a chemical base, as a key ingredient in these devices because of its ability to react with sulfur dioxide and other acidic pollutants. As well as other chemicals like activated alumina because of its ability to neutralize hydrogen chloride gas and other pollutants in the air, according to Sciencing.

A wet air scrubber will work to clean the air usually using a mixture of water and limestone that is sprayed into the smokestack. This chemical mixture will be directed through a tube packed with this mixture that will be released out into the air space. Whereas a dry scrubber will use limestone and other additional chemicals if necessary, without moisture. The mixture created by the dry scrubber will be sprayed into the smokestack, similar to the wet scrubber, and forced through a system to come into contact with the mixture. These chemicals will be released into the air and works by attaching to pollutants in the air.

What is an Air Scrubber Used for

Restoration projects and major indoor pollutant contaminations are considered the ideal times for an air scrubber to be used in an indoor space – especially when a large area has been tainted including thousands of square feet of space in this environment. Some of the main pollutants that an air scrubber can work to remove will include mold, dust, asbestos, lead, chemicals fumes, and other pollutants created by large-scale projects or accidents in the home. The fact of the matter is that when these pollutants are created and pushed into the indoor air of a home it will lead to them settling into areas within this space such as upholstery, carpeting, and furnishings that will end up contaminating the environment, thus the need for air cleaning protection.

For example, the most common uses of an air scrubber will be for mold remediation jobs, renovation companies, and job sites where flooding or fire damage has occurred in the indoor space of a home or building.

As we have previously discussed, there are many similarities when it comes to the functions of both an air scrubber vs air purifier, and even so there are also differences when comparing the two air cleaning devices. Among the most prominent differences between an air scrubber and air purifier is the different costs associated with each machine, maintenance needs, and the specific operating methods of the two air cleaning devices. When it comes to the mitigation of fine particulate matter from the air such as allergens that could aggravate human health, an air purifier will be a superior option to help eradicate these pollutants. In addition, an air purifier will be a more cost-effective solution for a smaller square foot of coverage in a home, in comparison to an air scrubber.

In addition to the cost-effective nature of an air purifier, this type of air cleaning device will also be easier to maintain – as the air filters will generally last longer in the machine than those of an air scrubber. This can be a major factor that plays into the overall cost to run and operate the device within an indoor contaminated environment.

There is a heavy use of air scrubbers in mold remediation jobs due to its ability to remove and mitigate those fine mold spores in the air. Many of these commercial air scrubbers will contain HEPA filters, you may be wondering what is a HEPA filter and how do they work, well they will work to properly capture, and trap mold spores and other pollutants produced from these aggressively growing funguses in an indoor environment. HEPA filters are one of the most efficient particulates removing filtration methods available for both air scrubbers, air purifiers, and HVAC systems due to its media surface’s thick and durable properties. The air scrubber will work like an air purifier to draw in the air from within the compromised environment and effectively filter out impurities in the air like mold using the necessary HEPA filtration.

Mold spores and the mold spore size are considered to be a fine particulate matter that usually ranges in sizes near 0.3 microns. These fine mold spore particles will easily be filtered past many air filtration technologies because of their small size, and thus the importance of using a HEPA filter in these air scrubbers to fully and efficiently capture these pesky small mold pollutants in the air.

How to Use Air Scrubber for Mold

When it comes to using an air scrubber inside of your home for mold remediation and removal there will be an array of things to do in conjunction to with the use of an air scrubber to eradicate the indoor environment of a home from mold/mold spores. Firstly, mold is usually brought into an indoor space because of moisture intrusions that allow for the ideal conditions for mold to grow in this area. Moisture can come from an array of sources such as leaking pipes, poor ventilation, and even floods that may have occurred in the home space. Therefore, it is important to locate these sources of moisture and fix them so that the moisture is no longer present in this environment.

Secondly, you will need equipment to help with the halting of this moisture problem – this will include the use of an air scrubber that can extract and clean the wet areas in a home that have promoted the development of mold. Lastly, the mold will need to be cleaned up and eradicated from the surfaces or areas in which it has tainted a home, and this is usually completed by a mold remediation specialist who is trained and proficient in safe mold removal indoors.

The remediation and cleaning of the indoor air from mold contaminants and pollutants like mold spores is something that is important to the air quality of this space and to the health of those occupants that face extreme exposure to these pollutants in their air. An air scrubber is typically used in large-scale mold remediation projects due to its ability to filter the air of a large area of square feet, however, although these air devices are capable of removing mold spores through the use of HEPA filters they will only be able to store the mold pollutants on a filter rather than destroying them. 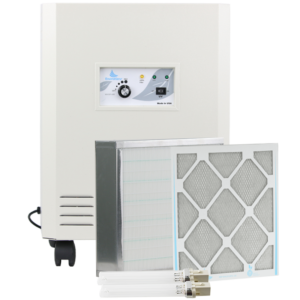 Whereas an air purifier, depending on the type of air purifier as only some are capable of this, can destroy collected mold spores within the air purification device through the use of ultraviolet germicidal radiation (UV-C lights) or uv light air purifiers. The EnviroKlenz UV Air Purifier is among one of the efficient air purification devices that are designed to capture, trap, and effectively destroy mold spores and other microorganisms safely within the air cleaning device. EnviroKlenz utilizes a proprietary earth mineral technology that is designed to capture, contain, and neutralize a broad spectrum of noxious and toxic chemicals and odors from the air – this is the first stage of filtration in the EnviroKlenz UV Air Purifier. The second stage of filtration in these air purifiers is a hospital-grade HEPA filter that is capable of removing fine particulate matter larger than 0.3 microns in size at a 99.99 percent efficiency rate – this will include mold spores, bacteria, and some viruses that can be found present in the indoor air. Located strategically above the HEPA filter are two UV-C lights that due to its positioning are able to shine directly on the collection site of the HEPA filter where mold spores and other microorganisms are collected to provide a high-efficiency kill on these pollutant matters. Therefore, having this air purifier in your mold remediation space will give you a highly effective mold spore removal in the environment’s air space. 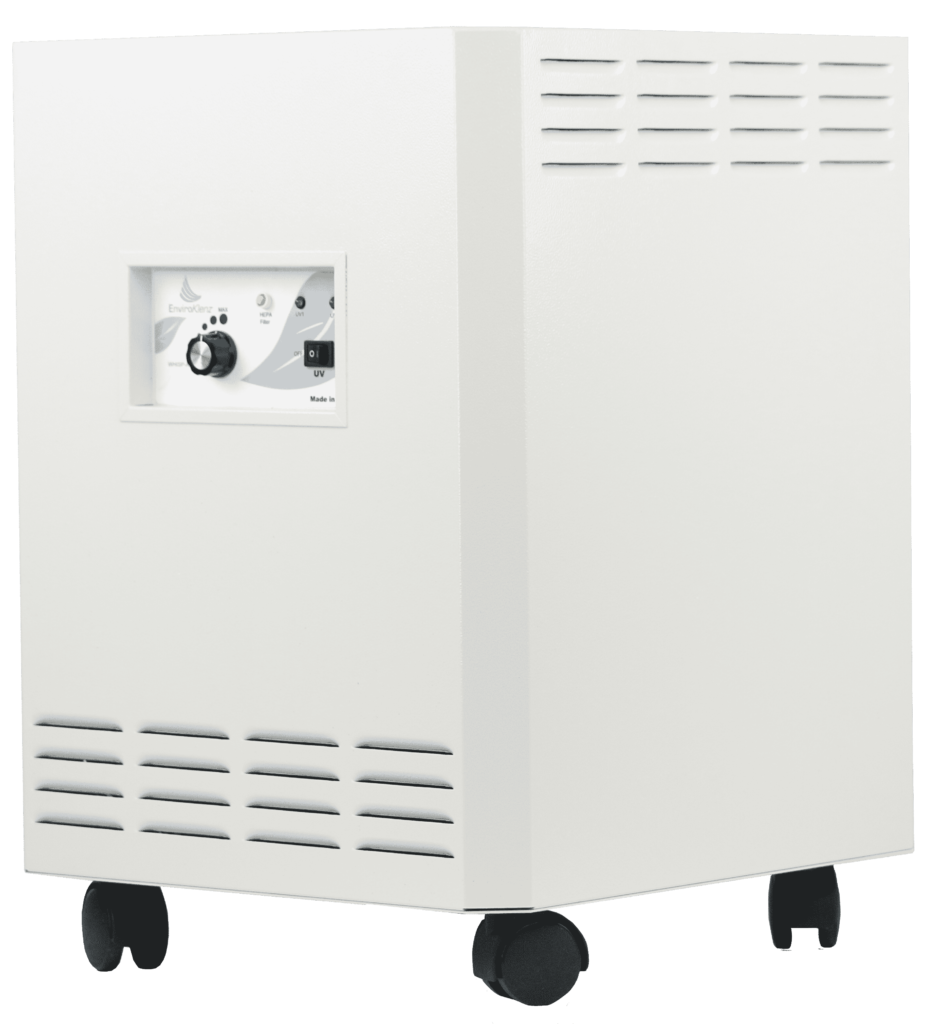