The EnviroKlenz Air System Plus are equipped with a true medical-grade HEPA filter. The HEPA filters 99.97% of particles. The filter has a life expectancy of 2 years.

The testing was conducted in a 1008 cubic foot biological environmental chamber. The pathogen was disseminated via a collision nebulizer. The EnviroKlenz® Air System Plus was turned on and allowed to operate for 2 hours and then the pathogen was collected and evaluated for viability via appropriate growth media and incubation period. The process also conducted without the EnviroKlenz® Air System Plus in the chamber to provide the natural decay of the pathogen. The reduction rates reported can be found above. *Testing performed and validated by Intertek, a third party, Total Quality Assurance provider to industries worldwide. Read Full Testing Report 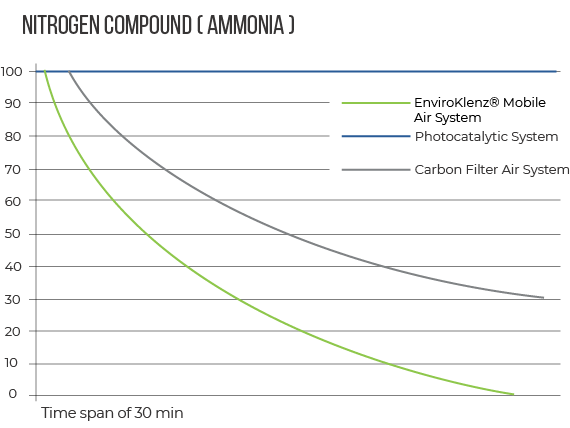 Formaldehyde can off-gas from varnishes and paints and is one of many compounds found in cigarette smoke. It is often found in manufactured products, synthetic materials, and building products such as pressed materials. EnviroKlenz® has similar results against a variety of volatile organic compounds (VOCs)