Are Soy Candles Safe for IAQ?

The fragrant smell begins to waft in the air as the flame ignites and melts the wax within the candle container, allowing for the environment to fill with the warming aroma of jasmine, lavender, eucalyptus or whatever appeasing scent you want your home to transform into. The use of candles in a home is a popular choice when it comes to leaving your home with a fresh scent, producing light in the space, or even creating a relaxing environment to help you unwind. However, when you ignite the wick of a candle is this the beginning of the slow emission of pollutants into the air that are produced from the wax and soot of the burning candle?

Candles are most notable for their beautiful smelling fragrances that are emitted into the air, but within the chemicals used to create these fragrances in the candle are also many other chemical compounds that will give the candle its major properties. From the candle wax, to the wick, all of these components of a candle will contain a different chemical concoction that will eventually be emitted into the air space in fumes as the candle is used within a home. These off-gassing candle fumes can lead to a potentially volatile indoor environment that will taint the overall indoor air quality (IAQ) in the home, as well as have a negative impact on the health of the occupants (both people and even pets) in this indoor space.

In this article we are going to learn more about how a burning candle can impact an indoor environment, the different types of candle waxes used today, and learn are soy candles say for IAQ.

What is a Soy Candle

Strolling down the candle aisle in your favorite store, you will be exposed to a variety of different types of candles – from different wax materials, a plethora of fragrant smells, and even a mix of ranging sized candles. When you are considering what kind of candle to purchase to use in the safe space of your home, most people will tend to lean towards the smell that the candle can offer to their personal indoor space. However, in actuality the most significant factor that should be considered when purchasing a candle is what kind of wax material and wick the candle uses and how this type of wax will impact the IAQ in your home environment.

Among the available options of candle waxes that consumers can select, soy has become a favored option due to its safer characteristics than other candle waxes like the traditionally used paraffin wax. A soy candle is a type of candle that is made from soy wax, which is a type of wax that is produced from soybean oil. The popularity surrounding this candle wax is attributed to its perceived safer and superior wax, but in reality, this belief has been identified as a fallacy and lacks superior benefits to the IAQ over paraffin candles – which was found to produce soot emissions and carcinogenic chemical compounds in the air from the candle’s burnt wax.

Where Does Candle Wax Come from

Candle wax is composed of a flammable, carbon-containing solid that when it becomes a liquid as it is heated above room temperature will produce and emit chemical fumes and soot into the air. The specific type of candle wax that is used in candles will vary depending on the candle, as some will use a particular type of wax to make the candle last longer, smell more fragrant, or even make the candle less toxic in the indoor environment. The main types of candle waxes that are used today in most candles includes paraffin wax, soy wax, beeswax, or a wax blend of these different waxes together in a candle.

These different types of candle waxes will contain specific properties which will make some of them better at holding and emitting fragrances, while others will excel at burning slowly and lasting longer in the indoor space of your home. It is important, that no matter what type of chemical you purchase to use in your home that you understand how it works and what chemicals or pollutants will be emitted from the candle into the indoor air of your home.

What Happens When a Candle Burns

A burning candle is an ambient scene that many enjoy in the space of their home, but the scene is often not something that is carefully thought about and understood, especially the mechanics behind this flammable emission from the candle wick. When the candle wick is ignited it will start to conduct heat that will than lead to the melting of the candle wax contained within the candle – which ultimately will lead to the emission of chemical fragrances into the air, along with other chemical ingredients swirling within the air space. The emission of chemicals into the indoor air space is something that we commonly refer to as airborne pollution.

When candles are lit inside of an environment it will steadily start to produce emission fumes into the air that will slowly taint the indoor air quality throughout this environment. The pollutants that a candle releases into the air can include carbon monoxide, nitrogen dioxide, and a high level of particulate matter. In addition, another pollutant that is produced from several different types of candles include VOCs (volatile organic compounds), which are known toxic compounds that will contaminate an indoor air space quickly and even has the potential to affect human health in some cases, according to Explain That Stuff.

Selecting a candle is not all fragrances and pleasant smells, there are many things that should be taken into consideration like the overall toxicity of the candle to the indoor environment. Typically, when people buy candles at their local store it will often times be a paraffin wax candle that is full of a plethora of chemicals and toxins that can have an adverse impact on the indoor environment. However, over the years there has been new developments made that have produced what has been labeled “safer” candle alternative to the traditionally used paraffin candles. Among the new safer options of candles that can be used in indoor environments is the soy candle, a natural candle that is said to produce less pollutants into the air.

Soy candles are a type of candle that is produced from soybeans, which is a natural renewable source that is grown in many regions by local farmers. This type of candle has been said to burn cleaner in the environment by producing little soot into the air from the burning candle. Although you may see some soot production in a soy candle, it is far less significant than the soot that is produced from a paraffin candle. Soy candles, also will have a longer burn time than traditional paraffin candles because of the slower burn time and cooler burning temperature that the soy wax is melted at when lit.

The choices when it comes to candles have broadened over the years, as more candle products have been manufactured to provide consumers with cheaper, safer, and longer lasting waxed candles to us in their home’s. As we have discussed previously, the traditional candle wax that was used for decades prior to the production of alternative candle wax materials was the paraffin wax candle. However, is a paraffin wax candle an unsafe option for your home and how do the other types of candle wax used today compare to this once highly used candle wax material?

Below we are going to compare the different types of candle wax and learn more about how these specific candles work and what they produce inside of an indoor environment like a home.

Are candles bad for you and your indoor air quality? When candles are used in an indoor environment such as a home, the candle will begin to emit fumes, soot, and smoke into the air which can all be composed of a variety of different chemical compounds, odors, and particulate matter which can ultimately taint the indoor air quality (IAQ) in the space. Any burning substance that is present inside of a confined space will produce soot into the environment, which is a known carcinogen that can have adverse impacts on human health upon exposure – and candles will not only produce this known carcinogen but also a slew of other contaminants into the indoor air as well. Depending on the type of candle wax that is used in the specific candle, other particulates and chemicals can be released and become airborne in a home such as volatile organic compounds.

A study conducted by the EPA on the different pollutants that are produced from candle wax and soot found that the soot of a candle – depending on the type of candle wax used – can produce phthalates, lead, and volatile organic compounds (VOCs) like benzene and toluene. These chemicals when they are produced into the indoor air of a home where occupants are heavily exposed to them, can produce various adverse health effects such as asthma, respiratory ailments, and other major health discrepancies.

Does Burning Candles Purify the Air?

Have you ever heard of candles as being a purifying agent in your home’s indoor air? It has been said that some types of candle waxes can create byproducts into the air like ions that will ultimately help to clean the air such as beeswax candles. However, this is simply just a fallacy that people have believed for years and is not actually a solution to improving the indoor air quality in a home. Conversely, most candles will actually create and produce pollutants into the air that can taint the indoor air quality rather than improve it. Thus, if you want to improve the indoor air quality in your home after it has been contaminated by candle pollution you may want to use a candle filter air purifier to help mitigate the indoor space quickly and effectively. 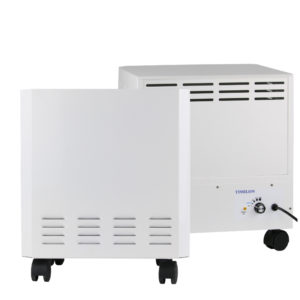 An air purifier, similar to candle wax, comes in a variety of types that will all work in specific ways and contain specific technology within the system to filter the indoor air of a space. When it comes to selecting an air purifier there are many factors to consider such as the technology it uses to filter the air, what contaminants it is capable of removing, and how effectively it will work in the environment. The EnviroKlenz Air Purifier is a safe and effective option for filtering a home’s indoor air quality, compared to other air purifiers on the market. The EnviroKlenz technology is a unique, proprietary technology that consists of safe earth minerals that are effectively capable of capturing, containing, and neutralizing a broad spectrum of noxious and toxic chemicals and odors from the air. This technology does not work by storing pollutants onto a filter like other technologies, rather it eliminates it completely from the environment – which makes it a resourceful solution for candle pollution removal.

In addition, the EnviroKlenz Air Purifier also contains a hospital-grade HEPA filter for fine particulate removal from the air. This can include particulate matter that is as small as 0.3 microns in size at a 99.99% efficiency, which will provide the indoor air with multi-layer protection from a variety of airborne pollutants in the air.