How to Get Rid of Pet Dander in the Air

The pets that flood your home with love, energy, and playfulness, can also contribute to excessive amounts of pet hair and dander that can circulate in the air of the home and settle onto surfaces within the space of this environment. Most households in America house pets within their home, whether it be cats or dogs, and there can be several pets within one home – which can really add to the levels of pet dander trapped within this indoor space. Pet dander that is released off of your pets’ fur and skin has the potential to elicit allergy symptoms in those exposed to the dander in the environment that suffer from an allergy to this allergen substance in the air.

According to the Asthma and Allergy Foundation of America (AAFA), they found that as many as three in 10 people with allergies will also have an allergic reaction to cat and dog dander and hair. Typically, cat allergies are twice as likely in comparison to an allergy to dogs, and this can be due to the type of dander that cats release from their body – a much different form of dander than dog dander.

In this article we are going to learn more about dog and cat dander, determine how long this pet dander will last in the air of your home, and the best ways to get rid of pet dander traveling in the indoor air.

What is Pet Dander

There can be many misconceptions when it comes to the concept of pet dander and identifying the difference between pet hair and pet dander. Often, people will link pet hair as pet dander, but the truth is that pet dander is not the fur that your pet sheds, rather it is small microscopic flecks of skin that are shed by the animal from their skin. Pet dander can cause allergic reactions in some individuals when exposure occurs, and the symptoms that are experienced can range depending on the dander, the amount of exposure, and the severity of the allergy.

Allergens and other allergy triggers can also be released from pets from other sources other than their skin. The American Lung Association stated the following about pet dander and allergic reactions, “Proteins found in saliva, urine, and feces from cats, dogs, and other pets can cause allergic reactions in some individuals”. When it comes to the major allergens released from cats and dogs that can provoke allergy symptoms, Del d I protein from cats and the Can f I and Can f II proteins from dogs will significantly exacerbate allergy symptoms when exposure occurs in an indoor environment.

What is Cat Dander

Did you know that cats are kept as pets in 27 percent of homes in the United States? However, there are twice as many accounts of allergies to cats in comparison to the other popular household pet, dogs. Pet dander, although it can be an allergen that will stir up allergy-symptoms in those allergic, are not the only allergens that can be released from your pet into the environment. Cats, in particular, release two allergens that can act as a vehicle for cat dander and promote allergy aggravation in humans – Fel d 1 and Fel d 4, according to PetMD.

The allergen Fel d 1 that is released from cats is produced by a cat’s skin and their sebaceous glands, that will secrete the waxy substance sebum to help waterproof and lubricate the skin. While Fel d 4 is produced from a cat’s saliva and deposited on the cat’s skin while they are grooming themselves.

What is Dog Dander

Similar to cats, dog dander can be found on the fur of this animal but there are also many other different forms that pet dander can be released from a dog that does not include its fur. A common fallacy of dog dander is that the shorter your dog’s hair, the less dog dander they will produce, however, this is simply not the case.

Additionally, there are some dog breeds such as poodles, that are classified as hypoallergenic and pose less of an allergy risk to those who suffer from this condition, but really there is no guarantee of that lessening allergy/asthma risks. A completely hypoallergenic dog does not exist, as each dog will release a specific pet dander that will have the potential to aggravate allergy and asthma symptoms in those who suffer.

Pet dander, like we discussed earlier, are tiny microscopic flecks of skin that are shed by cats and dogs that have fur. These flecks of skin can ultimately cause a reaction in those who are sensitive to the allergen or that suffer from allergies. Sometimes pet dander and pet dandruff are commonly interchanged with one another, and it can be difficult to determine the difference between these two skin releases on your pets’ skin.

Pet dandruff is a condition where dry, dead skin cells develop and then flake from the pet’s skin. A common sign that the white flakes released from your cat is pet dandruff rather than pet dander, is a follow up of itching or scratching from your pet, this itching may be excessive in some cases.

A pet allergy is a type of allergy that everyone dreads to experience, as sometimes the simple interaction between a person with allergies and their pets can trigger a bout of allergy-symptoms right away. Mayo Clinic describes pet allergies as the following;

“Pet allergies are an allergic reaction that occurs from the proteins found in an animal’s skin cells, saliva, or urine. The most common signs of this form of allergy is correlated with hay fever symptoms like sneezing and a runny nose, wheezing, and difficulty breathing.”

When individuals that are allergic to pet dander are exposed to this allergen in their environment, either on the surfaces or traveling in the air, the dander will easily become ingested or inhaled into the human body. As ingestion or inhalation occurs, the pet dander will ultimately trigger the allergic response in the immune system to fight the “offender” out of the body – through the allergic symptoms that are produced from an allergen.

When discussing pet dander, it is important to understand where it comes from – pet dander does not originate from pet dander but rather it secretes through saliva, urine, and skin glands as a protein. This secretion of pet dander will eventually dry on the dead skin and shed off as dander. As the dander settles into the environment, it will settle onto surfaces and/or become airborne into the air, eventually settling onto furniture, bedding, carpets, walls, and even drapes.

Identifying these small allergens in the air can be somewhat difficult, due to the size of the allergen. Air particles in the air are measured in microns, which equates to 1/25,400 of an inch, according to Animal Planet. Most home air systems and air conditioners are only capable of collecting particulate matter that is larger than 10 microns in size. However, pet dander – along with other particulate matter like pollen, dust, and mold spores, are smaller than 10 microns. These small microns are difficult to collect in the air, as well as difficult to visibly see.

How Long Does Pet Dander Stay in a House

Airborne allergens can easily travel throughout a home as it will float in the air and eventually settles onto surfaces found in this environment. Depending on the indoor environment that the pet dander has been released into, this allergen has the potential to linger in the air of this environment for an ambiguous amount of time. The time that pet dander stays in a house will vary based on different factors such as ventilation and air flow in the environment, the number of pets present in this indoor space, and the frequency in which the environment is thoroughly cleaned.

Best Way to Get Rid of Pet Dander

If you have pets in your home that are constantly exacerbating and triggering your allergy and/or asthma symptoms, it can feel like you are fighting a never-ending losing battle. You can’t get rid of your pet, nor would you want to, but the allergic symptoms are becoming too much to bear. What can you do? Well, thankfully there are solutions that you can incorporate into your environment that will help to overall minimize pet dander in the environment which will help your growing health issues. The best ways to get rid of pet dander in your home are as follows;

An air filter in a home is placed in the air handling system – air conditioner of furnace, to aid in the removal of potentially hazardous pollutants from the air. Traditionally, most people utilize cheap filters in their home’s air handling system to avoid costly replacements, however, these filters do not perform to the necessary standard for removing small allergens and other contaminants from the air. There are specific air filters for particulate removal that can be bought and used commercially to aid in the filtering of the air in your home from smaller particulate matter like allergens. It is important to carefully look at the benefits and capabilities of the air filter before you purchase it to use in your home’s air handling system.

Additionally, an air purifier used in conjunction with an effective HVAC filter will truly benefit an individual that has a pet dander allergy that is exposed to pet dander in a home. When selecting the appropriate and most beneficial air purifier for pet dander removal, it is important to get a purifier with a HEPA filter. A HEPA filter is a certified filter that is able to remove particulate matter at a 99.97 percent efficiency, removing allergens that are as small as 0.3 microns in size or larger. This is important for pet dander and hair removal as pet dander is a small allergen that is smaller than 10 microns in size, which can easily enter into the human body and elicit allergic symptoms.

The EnviroKlenz Air Purifier is a top of the line air purifier that combines the use of a patented earth mineral technology for noxious and toxic chemical and odor removal, as well as utilizes a hospital-grade HEPA filter for particulate removal larger than 0.3 microns in size at a 99.99 percent efficiency. This two-stage filtration will both remove those pesky, small allergens like pet dander from the air, while the proprietary earth mineral EnviroKlenz technology is able to break down the odors that can be associated with pets and pet dander – a double benefit for pet owners! 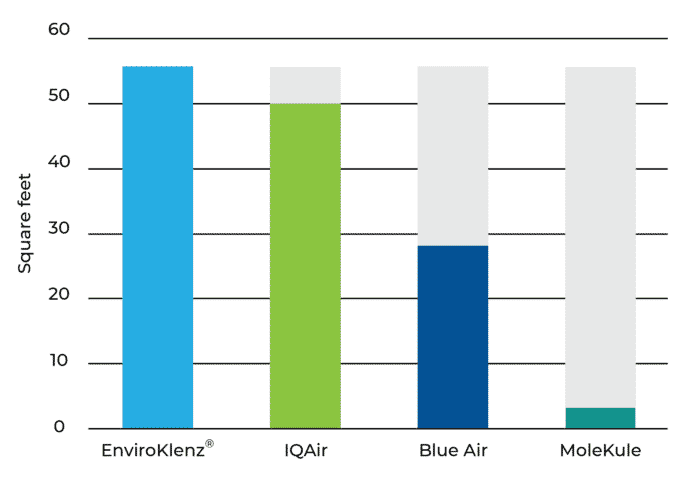