The Hazards of Bleach Fumes Indoors

A deep cleaning of your home is much needed, and when it comes to giving your entire home a good scrub down the go-to is bleach for most households. Bleach is a powerful cleaning agent that many people use to disinfect and kill germs and bacteria that they fear might have collected in their home. This disinfectant cleaning agent is a versatile product that can be applied on a variety of sources such as bathtubs, toilets, clothing, sinks, and even walls. Although bleach has many benefits in a home, there are, however, many risks to this chemical being applied into the environment that can impact both the air quality and the health of those exposed to bleach fumes.

Bleach is a highly hazardous chemical that can be found in many cleaning supplies such as toilet cleaners, stain removers, and even tile residue removers. Unfortunately, many households use these products without the slightest of clue that it contains chemicals within its composition that can taint the indoor air and potentially impact the health of those exposed to these dangerous chemicals in the air. When bleach is used within these different cleaning products, it will sit on the surface and continue to emit bleach fumes into the air for an undetermined amount of time, which can be alarming for your indoor environment.

In this article we are going to discuss the effects of bleach being used in an indoor environment and learn the best methods to use to get rid of bleach smell circulating within your home.

Is Cleaning with Bleach Safe?

When it comes to cleaning your home with bleach, many of us wonder if this chemical disinfectant is really safe to use, especially around kids and pets. Although the use of bleach in the home is typically labeled as “cleaning”, bleach actually does not act as a cleaner, and rather is a disinfectant that does a great job at killing germs and removing tough stains. Bleach will not clean dirt and residue from surfaces or materials, and thus why bleach is often used in conjunction with detergent when applied into the washing machine to clean clothing or linens.

The inherent risks and dangers of bleach is a commonly known threat, as the warning labels listed on this product are clearly addresses – including risks if swallowed and other exposure risks. According to a publication that addresses Bleach Toxicity, they concluded the following about the toxicity risks of bleach;

“The toxicity of bleach depends on where it is applied. Bleach can cause significant eye irritation and irritation to the mouth and throat. A dangerous threat of bleach is when this chemical agent is mixed with other household cleaners, such as ammonia.”

Ammonia vs Bleach: What Does Ammonia and Bleach Make

One of the major dangers of using bleach in the home is the potential for this chemical agent to mix with other household chemicals – which has the possibility of reacting together to create a toxic gas in the air of this environment. Ammonia is a chemical that is known to be highly dangerous when mixed with bleach in the home and is labeled as a mixture that should never be used in combination with one another.

According to Clorox, a major manufacturer of bleach, they state that bleach and ammonia should never be combined together, as these chemicals can potentially form a toxic gas in the air. They suggest following the general rule that bleach should never be mixed with other household cleaners such as toilet bowl cleaners, rust removers, and acids.

What is Bleach Made Of

There are several different types of bleach that are available for consumer use, they range from chlorine bleach, oxygen bleach, and bleaching powder. However, the most popularly used bleach is chlorine bleach, which usually contains sodium hypochlorite as the major component used in its formulation. Sodium hypochlorite is the active ingredient that performs the bleaching, stain removing, and disinfecting capabilities of the bleach. The sodium hypochlorite used in bleach is a reactive chemical oxidizer that will degrade quickly and eventually will degrade completely, according to Hunker.

Is Bleach Bad for You?

Did you know that bleach was the cause of 34,000 calls to the U.S. poison control centers in 2011? According to the California Department of Pesticides Regulation, they reported those statistics in their fact sheet called What’s the problem with bleach?, a fact sheet containing the different hazards presented from bleach into the environment. Additionally, this fact sheet provided by the California Department of Pesticides Regulation also states the following about bleach;

“Research shows that those workers that have been exposed to bleach can develop new asthma from this exposure as it occurs over time. The Association of Occupational and Environmental Clinics (AOEC), stated that in 2012 bleach was identified as an asthmagen, which means that this chemical disinfectant can cause asthma, not just trigger asthma attacks in those who already suffer from asthma.”

The level of risks that the bleach will create in the environment can depend on a variety of different factors. These factors can include the method in which the bleach was applied into the environment, how much bleach was used, and the conditions present in the indoor space (airflow, ventilation, etc.).

As bleach is used in a home or other contained indoor environment it will create a strong, irritating odor in the air that is releasing chlorine gas, a gas that can be potentially harmful to human health, into the air. Bleach can be applied in many different applications, each of which may impact human health differently and exposure can be in the form of breathing in, drinking, touching, or eye contact with the bleach in the environment.

The Michigan Department of Community Health addressed in a fact sheet called Bleach Fact Sheet, the dangers of exposure to bleach in an indoor environment, “Households that use chlorine-containing cleaning products such as laundry bleach are typically not exposed to the toxic chlorine gas when the bleach is used as directed on the label. However, exposure to bleach in high levels can occur when you mix bleach with other products that contain acids, such as any product that contains ammonia in its composition”. When bleach is mixed with ammonia it can create toxic bleach fumes into the air that can be extremely toxic to human health.

The smell of bleach is an often-recognizable odor that most people can clearly identify when present in the environment. The bleach aroma is produced through fumes that will be emitted when applied into the environment either through direct application onto the surface, through a spray or solution, and even in the laundry machine as it works on your fabrics. Mostly the smell of chlorine will hang in the air and make up a large portion of the bleach aroma that we associate with use of this product in a home or other enclosed environment.

How to Get Rid of Bleach Smell in House

After applying the somewhat abrasive odor of bleach into your home, the smell may begin to overtake the indoor environment, tainting the airspace with this putrid aroma. Some individuals may revel in the smell that is produced from bleach and think of the smell as a demonstration of their home’s cleanliness, while others may detest the chemical odor that is hanging in the air after the use of this disinfectant product in their home. Nevertheless, if you begin to experience symptoms that you are correlating to the exposure to the bleach fumes and odors, it may be necessary to begin the process of getting rid of the bleach smell that is floating throughout your home’s airspace, and quickly!

The increase of airflow and ventilation within the environment that the bleach has been used in will be critical in helping to expedite the bleach smell from your home’s air. Open all windows and doors in the house once you have applied bleach, this will help to create positive air flow throughout the space. Additionally, you can add fans into the space to help remove this contaminated air and replace it with fresh outdoor air, however, the trick is to aim the fans into the room and out the windows to promote this airflow removal.

When noxious odors and chemicals are emitted into the air of your personal indoor environment, it can not only affect indoor air quality but can also impact the health of those exposed, specifically those who are extremely sensitive to chemical exposure. Those who suffer from chemical sensitivities will be significantly impacted by the emission of bleach odors and chemical fumes in their air, and this exposure can elicit symptoms that can range in severity from acute to severe.

An air purifier is a device that can easily be placed in a home to help combat and mitigate a wide variety of noxious and toxic chemicals and odors that can hang in the airspace of an indoor environment. The EnviroKlenz Air Purifier is a top-of-the-line air purifier that is highly efficient in containing and neutralizing a wide range of noxious and toxic chemicals and odors including chlorinated compounds, that can enter into your home and taint the quality of this air. This neutralization process is accomplished through a proprietary earth mineral technology that is patented by EnviroKlenz and called “Adsorptive Neutralization”. The EnviroKlenz technology will effective break down the sodium hypochlorite that the bleach is composed of and neutralize the chemical and odor that is produced in the air. Additionally, this technology is combined with the use of a hospital-grade HEPA filter to capture particulate matter larger than 0.3 microns in size at a 99.99 percent efficiency. 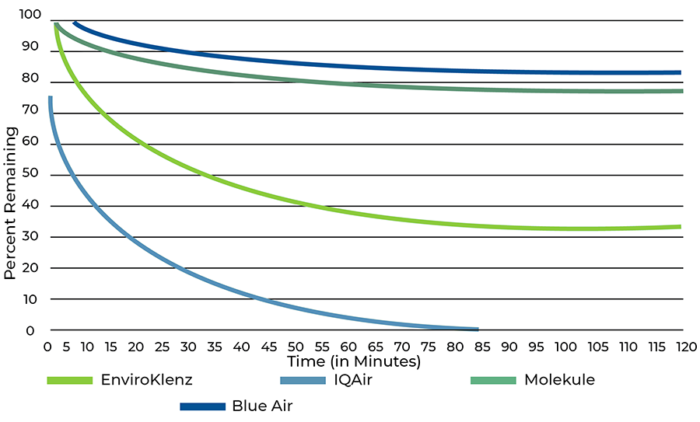 In this chamber study, a volatile organic compound was released in an environmental chamber under ambient conditions. The IQAir® was the air system that was able to remove the chemical the quickest, but since the system uses carbon media, the chemical has the potential to be released back into the atmosphere with an increase in temperature or changes to humidity and pressure. In some of our real-world evaluations, we have seen carbon systems start to desorb VOCs as the temperature rises towards only 80 degrees. The EnviroKlenz® Air System out-performed the BlueAir® and Molekule® systems, while also offering more than just physical absorption. The EnviroKlenz® Air Cartridge works through a combination of physical and chemical mechanisms.